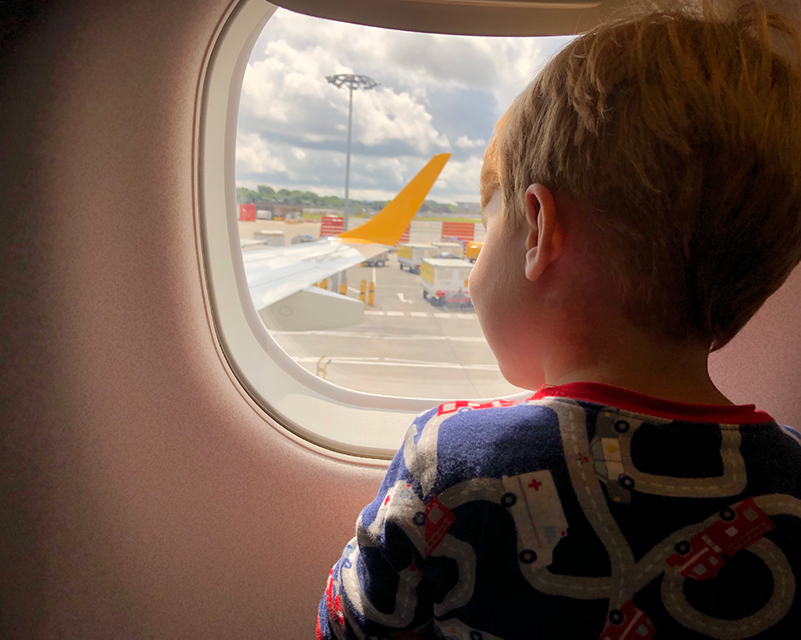 Quote of the Week
“I do not regret the things I have done,
but those I did not do.”
~ Lucas, Empire Records

The trip started Sunday morning. Our first flight was supposed to take off at 2PM PDT. We got an email at 7AM that it was 3 hours delayed, followed by another message an hour later that it was going to be another hour.

We were out of the house at 10AM as planned. Per my friend Ngoc’s recommendation, on our Podcast from the last newsletter, we were giving ourselves plenty of time to drop off the car, get through security, then have a nice breakfast. Now with the flight leaving at 6PM PDT instead of 2PM, we had some time to burn and I wasn’t about to sit at an airport for 6 hours… so detour to the Museum of Flight. It’s by the airport. We have a membership and it’s one of our favorite past times. Even better, the Blue Angels were out that day and they were having a whole event dedicated to it! This was a great start of happy accidents on what was going to be the longest day ever.

We got to the airport around noon, through security and ready for lunch by 1:30PM. It took a bit of walking but we finally found a spot and it was near some live music. Another happy accident. Great for the kids to just sit and listen and people watch while they waited and ate.

After, we loaded up on water and snacks and mosied to our gate.

While we were waiting I gave the kids some screen time. I looked over at my son, and he looked so tired. By now we were 2 hours passed nap time. I asked if he wanted to lay on me and have a rest. He looks up and says, “Mom, I got this.”

And let me tell you mommas, I carried that with me all the way through the first flight… “I got this.”

My husband paid for the upgrade to board first. Which was awesome. We got in our seats. Played musical chairs til everyone was where they needed to be. The flight was three, three, and three. My husband had one aisle seat then we had a three next to him. I sat between the twins so my husband could reach and could help my daughter who sat at the window.

Ngoc was right. Board early. Take your time getting situated.

Because our flight took off around 6PM we didn’t need to spend too much time entertaining the twins. They played with their iPads a bit. We watched 30 minutes or so of TV I downloaded for them from Netflix. Pro tip - Especially if you’re traveling abroad, and if available, download your kids favorite shows because different countries have different shows and they may not have what you’re kids know and love. Download!

They brought food around about 90 minutes into the flight. We flew Norwegian and my husband paid extra for inflight food which I’m very grateful for. I brought tried and true snacks per Ngoc’s recommendation, but it was nice to not have to figure out full meals.

After food my kids were ready to settle in for bed. I took them each to get their PJs on and brush their teeth. Then I blew up the little foot rests I mentioned in the podcast that I bought. These unfortunately did not work out. They didn’t quite come up high enough to level out the seats and my kids were just a little too tall to lay down in their seats. I think for 2 and under these would have been perfect.

I did however bring a favorite blanket for them to snuggle under and they each had a toddler pillow which also became a great asset not just for the plane but for hotels and apartments with new smells.

My husband got lucky and had an empty seat next to him so we tried laying the twins feet to feet across three seats. This didn’t work. They kept kicking each other. They were not happy. We tried putting my husband in the middle which wasn’t working until…. we caved and gave them Zarbees Melatonin. To which this became our saving grace on the plane and for the next three nights as we helped adapt all of us to the new time zone. Not gonna lie, I took the adult dose twice to help me.

It’s magical. So magical that the twins slept on the plane for 5 hours. They woke up about half way through and we had to readjust to get them comfortable again, but they fell back asleep and they probably would have slept through the landing if we let them, but we have a very tight connection to make and needed to make sure the were up, pottied, and ready to run (literally).

All in all it went relatively well given the delays, inability to get comfy, and just the straight up very long day. My twins took a 5 hour nap over the course of 26 hours. We landed in Guernsey and we all stayed awake until 6:30PM London Time.

Ngoc was right. There are two main key factors to surviving any long haul journey.

One, you must remain calm. They pick up on your anxiety to which I was swimming in. My husband was the hero on this trip. He was so calm and patient both on the way there and back in helping them get comfortable and at least relaxing if not sleeping.

Two, kids are resilient and we need to give them more credit.

On the way back, 90 minutes into our flight from London to Seattle, the plane had an electrical error and had to turn around.. We deplaned and 90 minutes later re-boarded. We were supposed to land at 11AM PDT and didn’t get home until 6:45PM PDT. My son slept for 90 minutes right when we took off (the second time) then again 40 minutes at the very end. My daughter stayed awake for 7 hours then slept the last 90 minutes. When we landed we had to go through customs. Wait for our bags. Wait for the van to take us to our car. Then drive 40 minutes home. Which they stayed 100% awake for. They went to bed on time at 8:15PM PDT and only woke up for the bathroom.

They were great. A little winey about being hungry or board, but for the most part they were quiet and patient. Little to no crying or tantrums. So happy to be home. I was worried about how they were going to deal with all this time zone shift and flights changes and they rolled with it.

The happy medium with traveling is to just do it. Plan as much as you can, but at the end of the day roll with it. All of it. Your kids are more resilient than you think. The calmer you are the calmer they’ll stay.

As always, you do you and keep finding your happy medium one trip at a time.