The Power of the Lovey 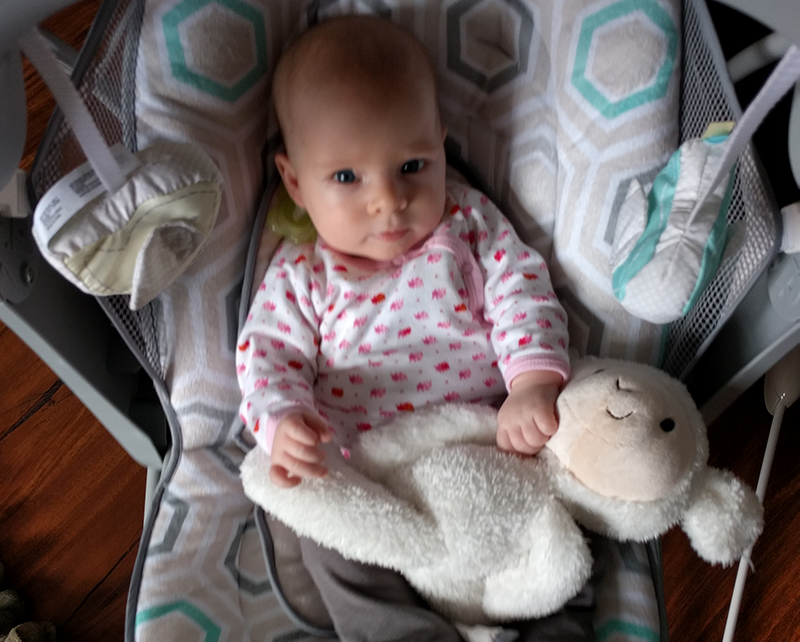 Quote of the Week
“That’s the power of love!”
– Huey Lewis and the News

The Power of the Stuffy/Lovey/Wooby

When my daughter was just a few months old, our nanny made the greatest discovery of all time.

Our nanny figured out that if our daughter was fussy even after sleeping, a diaper change, bottle, and/or burping that having her lay down on the sofa with Baba Sheep made everything right with the world. She’d be crying, then she’d snuggle up to Baba and drift off to sleep. Her and Baba became best friends.

Baba has served as many things beyond just being a stuffed sheep. Cuddle buddy, face mask, teething ring, balance maker when learning to walk (see photo above), pretend baby, and ultimate best friend. Baba has helped Baby Girl through so many big feelings. She would curl up in her bed, and just sit and smell Baba’s ear until she felt calm. When we bring up a big idea to Baby Girl, like someone getting very hurt, Baba needs to be rushed to the hospital after having fallen down the stairs. Baby Girl processes everything through play with Baba.

After a few months of experiencing the Baba bond, I realized the danger of only having one. So I took to Amazon and low and behold Baba by Gund has been discontinued! My husband and I searched high and low. He even called Gund to see if they had any in the warehouse they’d be willing to sell. No dice. So, I thought maybe I could have her attach to a different lovey that I could buy multiple of.

So, I bought a monkey, who I named Marcel. The ears were about the same. He was the same material. She wanted NOTHING to do with this monkey…. however… my son discovered Marcel’s tail and they become inseparable. A year later I bought another one which confused Baby Boy for a few months. We finally gave up and let him have both at the same time to which he was THRILLED. He still knows which one is the original and prefers it, but he’ll take the backup incase of an emergency.

Just this year (2019) we found a backup Baba Sheep. My husband set up an Ebay alert with a whole host of keywords around Lamb, Sheep, Gund, etc. He finally got a hit. £8, plus £20+ in shipping from the UK, we acquired a second Baba. Baba2 will never be Baba1. It’s just nice to know if something happens it’ll be rough for a little bit but at least she’ll find some comfort in Baba’s twin.

You have to watch it like a HAWK and know where it is AT ALL TIMES.

We had just come off the plane in London, 8 O’clock at night. I was carrying Baby Girl at nine months on the front of me in this baby carrier. When we got to baggage claim I adjusted her and tucked Baba between her and me, nice and snug. As we walked out of the airport, following signs for the hotel, we saw a sign, “1 mile to the hotel”. I took a deep breath, adjusted Baby Girl again and started the journey. Halfway there I looked down. Baba was GONE. I knew EXACTLY where we dropped her. At the mile sign. I rolled the suitcase to my husband and ran back, Baby Girl still attached, and thanks to all the lucky stars in all the Galaxy Baba was there, under a lone light in the middle of London.

Baby Boy dropped Marcel out of the stroller in one of our walks around the neighborhood (before we had Marcel2). We didn’t discover he was missing until right before bedtime. I continued the bedtime routine while my husband donned his jacket, flashlight in hand, and walked our normal loop, flash light pointing down at the ground looking left and right as he walked. In his giving up, he turned around, looked up, and there was Marcel, in a tree where some nice passerby gave him shelter from the light winter rain.

I’ve tried to create rules about Baba and Marcel never leaving the house. The twins know how to conspire and break them out. That rule lasted a week. And it doesn’t really matter because my children are also amazing magicians. They use every nook and cranny of the house to hide them. A bed time delay tactic. They know my husband and I will take ample minutes to pull the house apart to find them knowing they can’t sleep without them.

If baby finds comfort in a stuffy, you’ll need to get back up and keep track of them… ALL of them.

In this case there isn’t really a case of a happy medium. Either your child takes to a stuffy and that’s that or they’re blasé about it. There are a lot of beautiful things about watching a child bond with a stuffy and watching their many adventures. Having to ensure it’s not lost though is quite the stressful undertaking. I don’t know what life looks like without a stuffy because both my kids have them. I imagine it’s less stressful in not having to keep track. However, I don’t know if that means the kids might need you in order to fall asleep and/or calm down, which isn’t necessarily a bad thing, just isn’t always the most convenient like if they’re at daycare or being babysat or they’re twins.

Either way, you just keep doing you, and find your happy medium one snuggle at a time.