How to Train Your Three Year Old... to Fall Asleep 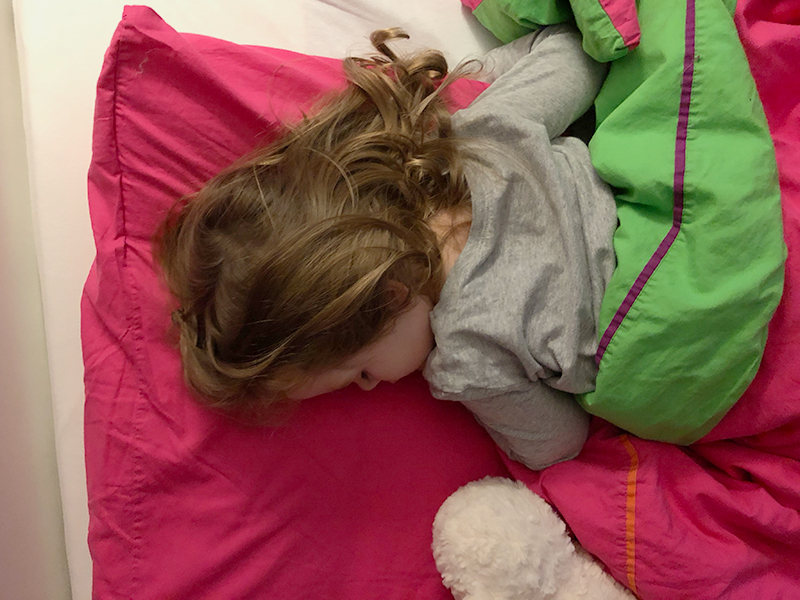 Quote of the Week
“The woods are lovely, dark and deep.
But I have promises to keep, and
miles to go before I sleep.”“
~ Robert Frost

Sleep is for the weak

My dad used to use that phrase. Man can survive on 4 - 5 hours a night.

I think my three old has his genes because for the last few months (maybe longer) she has fallen asleep, earliest by 9:45PM and we had to go in her room multiple times between 8:30 and 9:45PM until she did.

Here was our bedtime routine:

I thought pushing bedtime back would help so lately she’d be in bed by 8:45 which would be an hour of insanity of going up and down to figure what she needs now.

She’d be going to bed later, waking up later, and fighting naps. She’d call for us more, and my husband and I would end up yelling at each other because he’d do one thing, then I’d do another and we’d be sending mixed messages all over the place. It. was. awful.

We tried crying it out. Threatening nightlight off and door closed. We begged. We negotiated.

Then, I was sitting at dinner with a friend and I asked when his almost, three year old son goes to bed and he said that they shoot for 7:45 - 8 and if they miss the window then he’s up until sometimes 10…. AHA! I’ve been doing the opposite. I was pushing bedtime later, not earlier!

The other thing I did once I was at my wits was go back to my Positive Parenting courses to see what Amy had to say about “Bed Time Blues.” And she made some other comments that made sense to me. Amy is a firm believer in one on one time with kids. If they don’t get enough individual attention during the day then they use bedtime battles as an excuse to get attention. The other thing she said that made sense, was to keep bedtime routines less than 30 minutes. Notice my bedtime routine up top? At LEAST 45 minutes. Also with TV there’s no individual one on one time.

So this week here’s what I did.

Starting at 7PM, I give each child 15 minutes of my undivided attention, one on one. I take turns, baby girl first one night, then baby boy second. Then I switch the next day.

I just need to emphasis, how much my kids LOVE this time. They look forward to it all day. As soon as dinner is done they’re asking about it. This works. I stopped doing it the last few weeks because I’m between nannies, work has been insane, and my husband has been on site for work all week, and I just didn’t have the energy for this… which backfired at bedtime BIG time. So 7PM - Special Time has been reinstated.

Short and sweet. Tubby, pjs, teeth, story, lights out all in 30 minutes with two kids. It can be done!

Bath time is 15 minutes tops, PJs and teeth in 5 minutes, then one book each, lights out.

One thing Amy mentions is when you’re trying a new routine to actually walk through and practice it. So one afternoon, after naps, I had the kids walk through their new bedtime routine. The important piece to this - reversing the roles so that they watch you do it and pretend they are the parents. This gives them a chance to do it AND see it. That helped the first night because then there were no surprises on how we were going to run bedtime that night.

It runs a bit quick and sometimes a little stressful, but they are in bed with lights out at 8PM.

Her night light. if she wakes up before 10, and it’s on she can’t fall back asleep. So next time, I removed it. She cried that it wasn’t there when she fell asleep, so I gave her 2 minutes that first night without it, then 90 seconds the next night, 60, 30, then all done. The second night she still woke up at 9:15, but she fell right back asleep. The next night she didn’t wake up at all - at least if she did she didn’t call for me.

If I was try a night light again I’d probably get something like this where you can set it to go off after a certain amount of time… but that ship has sailed… I will also say, I have heard many great stories about how that light helped kids stay in bed until parents wake up.

Thank you Daylight Savings Time (DST)… for nothing.

Well… I was on to something.

My daughter was falling asleep at 8:15PM. Awake by 7AM. Napping right on the nose for 90 minutes without any pushback. It was a great three days.

Now that the clocks turned forward an hour I feel like I’m back to square one. Well, not completely. They are exactly an hour off. So…

According to Amy’s Bedtime Blues - she says to figure out what time they fall asleep then turn off the lights just about that time. Then, each night shift bedtime a few minutes until it’s in the sweet spot. With my son going to bed at 8PM he was waking up at 6:15. That’s too early. I think I’m going to shift our routine to start at 8:00, putting them in bed at 8:30 and that way he wakes up close to 6:45… in theory.

In the meantime you do you, and if your kids are falling asleep before nine, sleeping through the night and getting the full amount of sleep prescribed, then you are my hero and I’d love to hear how you made that happen. Tweet mommafinds or find me on Facebook.