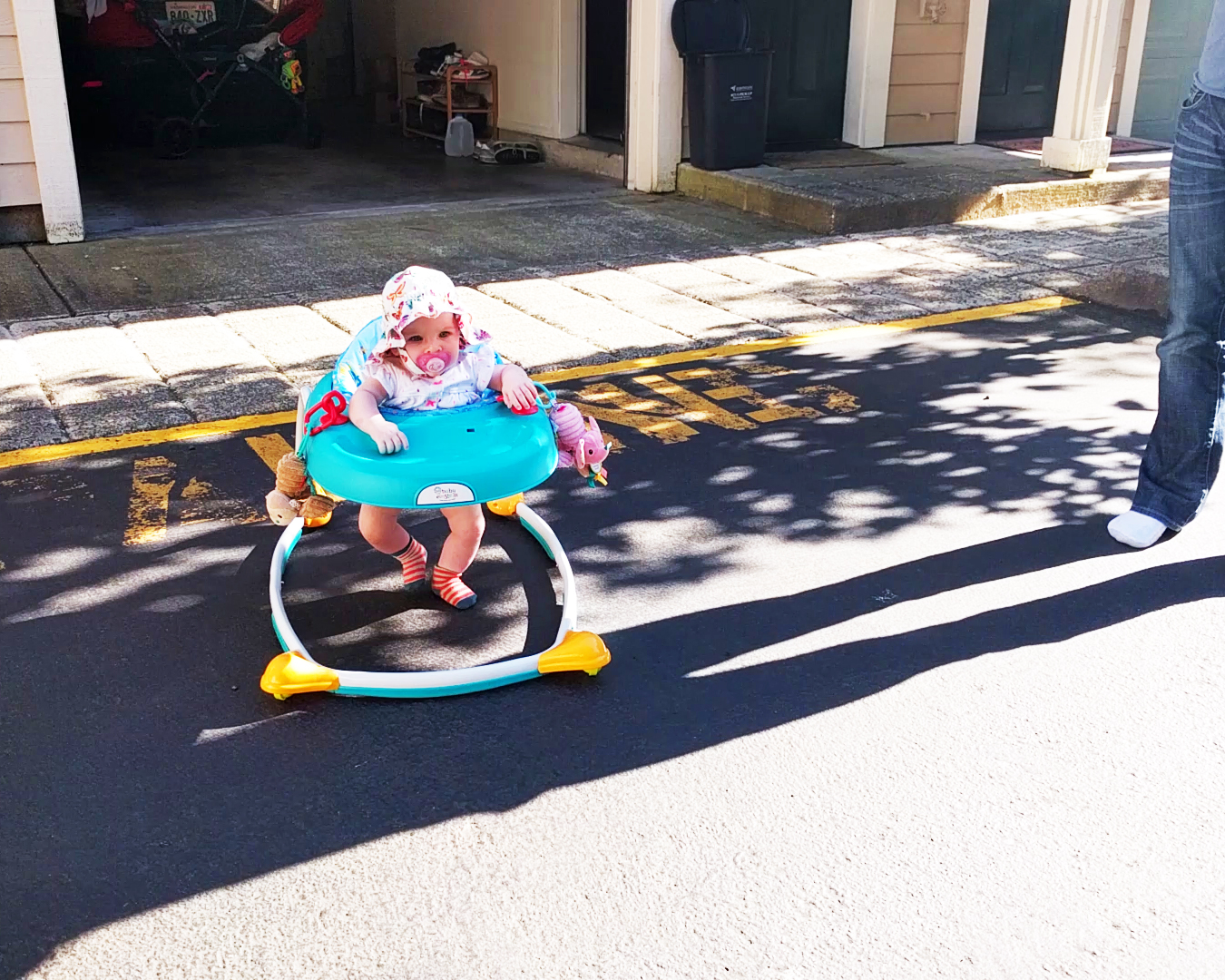 Quote of the Week
“Baby steps to big dreams”

I have been at many a playground, overhearing moms talk about this thing their baby did or that. For infants it’s usually early walkers being a hot topic and all the trials and tribulations of baby on the move. One of them being scared of baby walkers and delaying a babies ability to walk.

My husband and I loved to brag about our early little walker and how she decided the airport was the perfect place to practice. E had been a walker since 5 months when we bought her a walker.

Like most things she didn’t start off as a pro. The key to E is trying over and over and over again. Same with her walker. She started on one foot pushing herself in circles. By 9 months she was fulling standing in it using it to basically catch her when she fell over.

My son on the other hand, hated his walker. He was super lazy in it. Mostly just sat and played with the toys on front. He didn’t walk until 15 months I don’t think the walker had anything to do with his delay. He didn’t do anything in terms of “on the move” until very late. He wasn’t crawling and when he was in the walker he didn’t even try and get around.

Not in my experience. But my data is antidotal.

I found one study from 1999 that suggests that visual feedback about body position and limb movement is necessary for the timely acquisition of motor milestones. If you’re buying a baby walker in an effort to teach baby to walk then according to this, it won’t teach them because the tray prevents them from seeing their feet.

Pediatricians advise against them because babies have been known to drown from tipping in pools and toilets. Babies have fallen downstairs, pinched fingers, and burned their hands. However in 1995 new standards were placed on walkers and since implemented injuries have dropped 60%.

So yes, baby walkers can be VERY dangerous with out taking necessary baby proofing precautions.

If you’re going to get a baby walker then baby proofing is a MUST. There’s always a happy medium though. Anything sharp needs to be in a cupboard higher than the sink. No stove top/oven cooking while baby is cruising, not unless you have a baby gate blocking off the kitchen. Stairs should 100% be 100% blocked. We lived in a town home so we did have a flight of stairs that went down from the living room. We had a baby gate and we used to move our ottoman in front of it so that we created more running room AND it was one more layer of protection. Doors to bathrooms closed. The only “NO” we had was the entertainment center and keeping them from crashing into it, but really they weren’t cruising indoors. They sort of used one foot to move them slowly mostly in circles. Once they gained traction we moved them outside.

Fun fact: Until recently New Zealand banned walkers, but given obesity rates and new safety features, like gripping and brakes for stairs, have asked parents to reconsider it.

The happy medium here is to balance between the baby walker and tummy time. Tummy time helps baby to start moving on their own through pulling, crawling, rolling, etc. The walker mixes it up for them by getting them on their feet, helps them explore sooner, and get another form of exercise.

The potential con is that it doesn’t relieve work on your part. You still need to watch them closely. You can only baby proof so much.

The pros are watching their joy as they figure out they can get around and gives them a little exercise to run out some of that pent up energy.

TOOLS OF THE TRADE

If you do decide to get a baby walker we had these:

Both worked well. I didn’t prefer one over the other.

Once they were pulling themselves up, I grabbed one of these and my son used it a TON when he was actually learning to walk. The nice change from walker to this was that they could decide when they wanted to walk opposed to needing you to put them in a walker. I do believe this actually helped my son practice walking. He also pushed chairs around, laundry baskets, anything that was tall enough and could move he used to try and keep up with his sister.